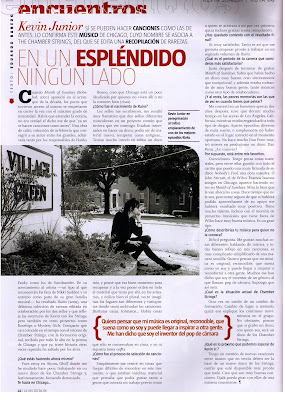 Y además reproducimos esta entusiasta reseña que se incluye en el blog "The Beautiful Music":
"The purveyors of good taste at Sunthunder Records in Spain along with Hanky Panky Records have done it again - released an essential album for your listening pleasure. "Ruins - A Collection Of Rarities, B-sides and Outtakes" is a must have by a gifted songwriter and multi-talented musician - Kevin Junior. An interesting side note for label geeks like me is that Sunthunder Records is the label that also released the wonderful Nikki Sudden tribute "Suddenly Yours" and the Dave Kusworth collection "Tambourine Girl" over the past few years, along with many other fine releases and Hanky Panky are the ones with the releases by Alan Tyler of The Rockingbirds fame among others. Kevin Junior may be a familiar name to many, as a singer, songwriter, guitarist with The Chamber Strings, an amazing band he formed in 1997, a band that received only a small fraction of the attention they deserved, in my opinion. They released 2 marvelous albums ("Month Of Sundays" and "Gospel Morning" on Bobsled Records), and a few singles of truly beautiful Pop with orchestral and psychedelic flourishes, releases that are among my favourites and albums that I often return to. I admit that I didn't know the whole story of Kevin Junior and still don't, but this collection along with the accompanying 16 page booklet is helping to fill in some of the gaps and to see that there is a rich musical depth and brilliance behind this artist. I had known for some time that Kevin was friends with Nikki Sudden and Epic Soundtracks (so any fan of these two will definitely be interested), having played live and recorded with them - actually, Epic's final album "Good Things" was recorded with Kevin playing a significant role. What I didn't realize was that he also played with The Mystery Girls and The Rosehips and has been in the music scene for some 22 years, so it's about time that more folks discover this great music.This compilation is an excellent introduction to Kevin's music, with some variety in style and some real choice covers - where he infuses songs with his stamp of originality. The very first song alone, "Common At Noon" is reason enough to pick up this collection, - it is a brilliant cover of a song by The Real Kids, which sounds nothing like the original but more a true "lush pop ballad", proving that anything he touches can turn to gold. There are more covers (Bacharach, Thunders, Thin Lizzy, Dan Penn - which I really enjoyed) and many highlights of which "Beautiful You", "Beautiful Mothers & Somebodys Wife" and "Last Lovers" are only a few of the majestic gems, that just have to be heard to be believed."Ruins" is a masterpiece and it's hard to believe that these treasures have been gathering dust for so long. I'm certainly glad cleaning day came around and please do keep digging through that clutter so we can hear more of these beautiful ruins (I would really like to hear the other Johnny Thunders cover). Then Kevin Junior will become a household name and it will be well deserved!"